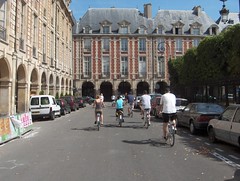 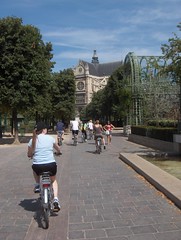 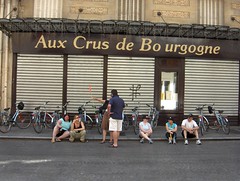 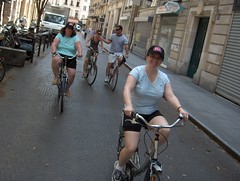 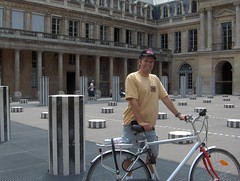 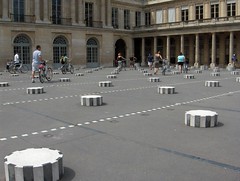 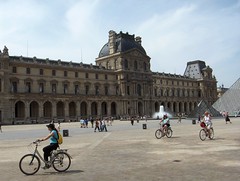 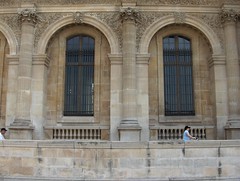 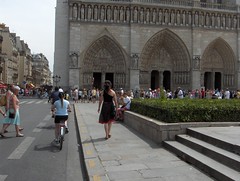 Paris, July 22, 2006 - Bicycling was a very appropriate way to see Paris, considering that we were there to see the Tour de France. But I'd recommend it no matter what sport you're in Paris to see. You'd probably look silly kicking a soccer ball all over town, or trying to arrange a modern pentathlon to get you to the sites. (Do they even do modern pentathlon in France? Or does it only exist every four years at the Olympics? I could look it up, but why bother?). So biking is the way to go.

Anyway, the bike tour (from a company called "Paris à vélo c'est sympa!") was one of the many awesome events that Sue's company arranged for us while we were there. There were about 40 people on the trip - some of Sue's clients, some of Sue's coworkers, and some lucky guests of people in the other two groups. About half of them signed up for the tour, and only nine actually showed up to do it. The rest all had second thoughts: too scary, too difficult, too hot, too whiny... Sue apparently works with a whole crew of nervous Nellies.

The ones who were brave enough to go all thought it was fabulous. It was easy enough to be appropriate for all ages and abilities, and most of the trip was on attractive, empty side streets. We'd bike for a few minutes, then we'd stop and listen to the attractive, friendly tour guide talk about where we were for a few minutes. Repeat for about two and a half hours; really, it was great fun.

And the heat wasn't much of a bother - once you're going, you get a nice breeze. It was probably the coolest I felt all weekend, actually. Every day it was sunny and in the 90's, and while the French *have* air conditioning, they don't seem to know how to use it. They'd cool the buildings (even the airport) down to, oh, about 85. Even a woman we met from Phoenix complained it was hot.

But back to biking: it was such a nice time that after it was over, I was ready to rent a bike for the rest of the weekend. Although I wouldn't have had much time to enjoy it; the weekend was packed with activities, about which I'll write more some other time...
Tags: biking, france, vacation
Subscribe