It's Fun To Say "Speonk" 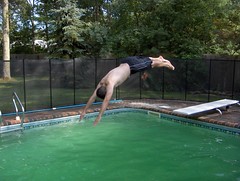 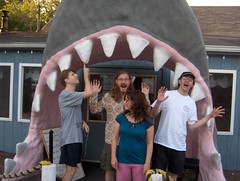 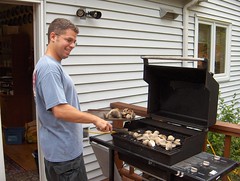 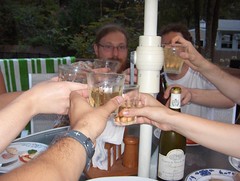 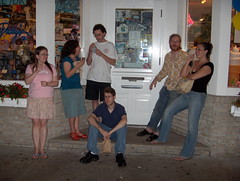 Speonk, Long Island, July 29, 2006 - Saturday was a beautiful day to go to the beach - sunny and temperatures in the 90s. Which is fortunate, because we rescheduled my birthday beach trip for that day. Sadly, of the 90 or so people on the Evite, only three people (not including Sue and me) responded "yes". Sure, some people were busy already that day, but there are a surprising number of people who simply don't like the beach. Or maybe they simply don't like Evite. Or maybe they simply don't like me. I won't dwell on that. Whatever the reasons, we were still happy to go to Jones Beach with our tiny, but loyal, bunch.

Our friend John came up with an alternate plan: Unlike my parents (who moved to Florida about five years ago), his parents still live out east. But they weren't going to be at the house that weekend, so he invited our group of stalwarts (and a couple of others) there instead. And it turned out to be a great idea. We shopped at a local farm stand and local fish market for most of our provisions (fresh mozzarella, in-season tomatoes, berries, and sweet corn; freshly-caught swordfish, mako shark, tuna, and little neck clams), stopped by the supermarket for steak, beer, and condiments, and visited the liquor store for wine and prosecco. We swam until we were pruny, and had ourselves one fine cookout. Yum.

Later that night, we walked around downtown Westhampton Beach and had some ice cream, just like I remember doing back in high school. (And many times since then). Most of the shops stay open late on summer weekends; it's still pretty crowded at 10:30 on a summer Saturday night, which makes for some great people-watching.

All in all, a great day, even without the beach. Thanks to John for making it possible!