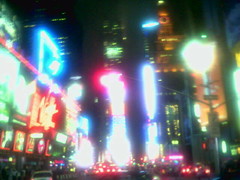 T-Squared
Originally uploaded by Joe Shlabotnik.
Times Square, New York City, October 6, 2005 - I recently had to sign my life away in order to replace my cellphone. Buying a cellphone *should* be like buying a regular phone, where one buys a phone from any store, and negotiates service with a separate service provider. But of course it's not nearly that easy. In fact, I found that Verizon would not let me replace my phone at all - at least not without my wife's presence and permission. That's because my wife's name, not mine, was on the bill. And also because we were locked into a contract, giving Verizon the freedom to not give a rat's ass about customer service.

I had to come back another day with her, and then go through a gauntlet of signing papers and waiting for credit reports and declining the insurance (what idiot pays $5 a month for a policy with a $50 deductible on a $100 item?). Surprisingly, I eventually managed to walk away with a shiny new phone. I was beginning to doubt I ever would after being there for 45 minutes. It was easier to rent an apartment. Sheesh.

I was disappointed to learn that cellphones, unlike digital cameras and mp3 players, have not gotten any smaller or sleeker in the three years since I bought my first one. Color screens and built-in cameras are neat, but I am sad that Apple has not gotten into the cellphone-designing business.

So this is what Times Square looks like through my cellphone camera. It's also what Times Square looks like after a few rounds of caipirinhas. I took a detour through there while coming home from a bar last night. Oh, I know New Yorkers can be so snobbish about it, but as for me, I like Times Square. Sue me. I like the lights, I like the way it's different every time I go back, I even like the crowds of tourists - yes, I like tourists. It's invigorating to be around so many people who chose to spend money and their meager vacation time to visit my city. They remind me to not take it for granted.

(Of course, I also enjoy noticing just how different and out-of-place they tend to look. But I only do so in a good-natured way, really.)
Collapse