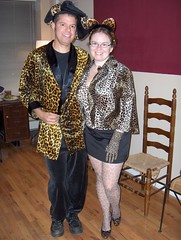 Rowr
Originally uploaded by Joe Shlabotnik.
Manhattan, October 28, 2005 - Call me old-fashioned, correct me if I'm wrong, but I believe that when one goes to a costume party, one should show up in costume. That sounds reasonable, doesn't it? Yet of the four Halloween parties we went to this weekend (one on Friday, three on Saturday), non-costumed guests were the vast majority at three of them. How lame. Despite others' lameosity, we had a fantastic (and very late) weekend. And we were proud to be part of the costumed minority.

Saturday night on the streets of Manhattan, however, costumes ruled. We drove from our house to a party in Brooklyn, then to a party (and friend's book signing) at a bar in Gramercy, then to a party in Morningside Heights, then back to Queens. That's lots of driving around. And as the night wore on, the percentage of people wandering around on the streets in costume increased dramatically. By 3am (2am, really, due to the end of Daylight Saving Time) nearly everyone who was still out was costumed. Sort of surreal, considering that it wasn't actually Halloween. But quite enjoyable - it was fun to see that *somewhere* some people were getting into the spirit. And it certainly didn't hurt that the majority of women's costumes involved either a short skirt or a *really* short skirt. What a great holiday.
Collapse