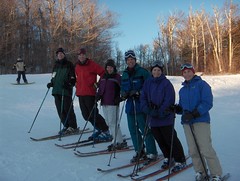 Ski Buddies
Originally uploaded by Joe Shlabotnik.
Killington, Vermont, January 28, 2006 - Skiing is lots of fun with lots of friends, but it's hard to get a group together. I'm amazed that we managed to get seven friends to come along last month (has it been a month already?). Plus we met up with a friend's brother and his dozen or so friends who were there the same weekend. Great weekend. Too bad it was a short weekend.

But this Sunday we're heading to Whistler for a week. Hooray! We're going in a group organized by our local ski shop, so even though we don't know anyone on the trip, hopefully we'll meet some cool people. Not that it matters. Whistler is awesome regardless. 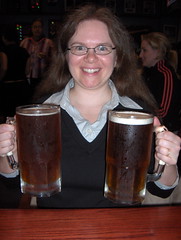 Nice Jugs
Originally uploaded by Joe Shlabotnik.
LaGuardia Airport, February 3, 2006 - Yes, I'm so juvenile. But she happily went along. So we're both juvenile. Hooray for juvenility!

We were on our way to Orlando. (Are we ever not travelling??)

(UPDATE - apparently, I'm not the only one who likes this idea) 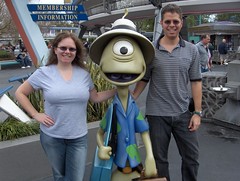 Hanging Out With The In-Laws
Originally uploaded by Joe Shlabotnik.
Tomorrowland, February 4, 2006 - We were in Orlando visiting Sue's parents. Cheap weekend, actually. My flight was $130 round-trip and Sue's flight was paid for by her company (because she then went to a conference in Miami that Monday). We bought our Walt Disney World tickets in a seven-pack a year ago, so here we are.

We've been to all the other major parks since Sue's parents moved there (we love going to the parks), but the last time we were at Magic Kingdom was when I lived in Florida in 1995. (Before that, I had been there with my parents in 1978 and 1982.) It felt like I was just there yesterday. It was 1995 all over again. When I was there in 1995 it most certainly did *not* feel like 1982 all over again!

35 is of course a lot closer to 25 than 25 is to 12. It's funny how when you're in college, you know that people 10 years younger than you are completely different than you are, so naturally you assume that people 10 years older are just as different. And yet 15 years out of college, I still don't feel much different. Except that I sometimes talk about house renovations. (But I don't *have* to! Really, I can stop any time I want to...)
Collapse