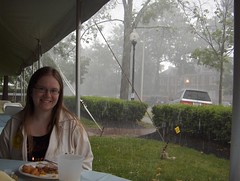 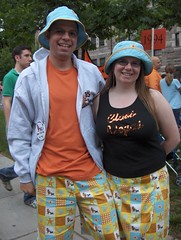 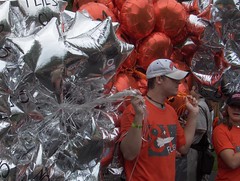 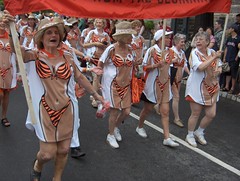 Wives Of The 50th Reunion
Originally uploaded by Joe Shlabotnik. 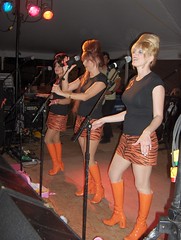 Princeton, New Jersey, June 3, 2006 - Saturday is the big day of Reunions. There is plenty of time on Thursday and Friday to wander aimlessly and do your own thing, but Saturday is chock full of events from sunrise to way past sunset. I've gone to eighteen Reunions in a row, and Sue has been to fifteen out of the last sixteen, so by now we both have our Saturday schedule down to a science:

First, we get up with some sort of mild hangover, not only from drinking, but also from shouting and dancing until later than we're used to, combined with what's usually a lousy night's sleep in a hot dorm room. Then we pick up a free donut or two and some watery orange juice on our way to the Princeton University Band's Fred E. Fox '39 Memorial Concert on Cannon Green at 11am, where we mingle with other Band alums and marvel at how much better the Band sounds these days. (This year we also marveled at the torrential rain and pitied the poor band members playing out in it).

(As you can see in the picture, it only rained harder as we were having brunch, but magically the rain stopped about half-hour before P-Rade started. No matter how much it may rain all weekend, it never rains on P-Rade. That's the rule. Someone at Princeton has connections. Well, okay, last year the rain started a little early and drenched the senior class, but everyone else had already finished and was safely inside. So that hardly counts.)

"P-Rade" is what we call the parade of alumni through campus, starting with the Band and the 25th reunion class, then the rest of the alums from the oldest (Class of 1925 this year) to the youngest, and ending with the senior class. Most everyone is in their costume, blazer, or beer jacket, which makes for a colorful sight. There are multiple bands, classic cars (often done up in orange and black, natch), steam calliopes, the works. We cheer for the older classes while waiting for our turn in line, then cheer for the younger classes as we go by. It's a giant orange love-in.

(Well, a partly powder-blue love in this year. For the 15th, along with white or gray sweatshirts and quilt-patterned pants, shorts, or skirt (our choice), we got powder-blue hats, which had everyone asking: "Blue? Why blue?")

After P-Rade there are receptions for various undergraduate groups and academic departments - we stop by the Band tent for a bit, then we usually go to Tower and/or Cloister (Sue's eating clubs) to snag dinner. (This year we skipped Tower and ate lightly at Cloister because, it being a major reunion year for me, we had dinner back in Little/Edwards courtyard. Steak and chicken, not bad.)

Dinner is followed by the Orchestra concert on the baseball field, which is then followed by a spectacular fireworks display. (Instead of sitting on the wet and muddy baseball field, we sat on the back porch of Charter where we could hear the music and see the fireworks rather well. It was the ideal spot - we were dry, comfortable, and we could have a beer if we wanted.)

So by the time all that is over, it's nearly 10pm - time to head out and wander from courtyard to courtyard, dancing, collecting cups, snagging the occasional slice of free pizza, drinking gallons of beer, wine, margaritas, and soda (mostly soda for me tonight), and hearing "Mustang Sally" over and over. Why do so many bands play "Mustang Sally"? Must be a Princeton tradition.

(The 10th Reunion had the same 80's band that we had at the 15th on Friday night, so we stayed there for a while, then there was a good band and DJ at the 5th, and finally we ended the night at the 15th, which wasn't nearly as crowded as it was Friday night, probably because of the band. There was nothing specifically wrong with the band, except that they were playing the same old songs you could hear at the 20th, 25th, 30th, 35th, 40th, and presumably 45th reunions. For example, "Mustang Sally". Not music for our generation, really.)

I closed our reunion down, declined to go out to Charter again, then sat up chatting with Rodney (my roommate) until past 3. Holy crap, what a full day. And it's nearly all over.