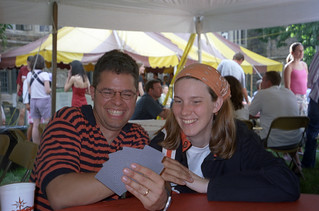 rebbyribs!! I was stuck at home all day without internet access, and the cable guy showed up to fix it half an hour after the four-hour window I was given. Hope you had a far better day than that!

As for my birthday this past weekend, I've had better (2001 - a friend's wedding at the incomparable Villa D'Este in Lake Como, Italy, complete with waterskiing), but I've had worse (1995 - all by myself in Stuart, Florida). The rain came and ruined our beach plans, so all I did during the day was go for a run, have some pizza, and take a nap. We went out for an early dinner (7pm is early), then met up with folks (including

oddthink) at Gaslight Lounge, where we stayed until after 2. By 11 I had said I was swearing off any more drinking, but friends kept showing up throughout the night and insisting on buying me gin and tonics (gins and tonics?). My friends are trying to kill me. Sue and I got home (alone) around 3 and I proceeded to have the worst night's sleep ever. Amazingly, I got up around 8 feeling tired, but otherwise fine. Still, I was tired enough that I didn't set foot outside on Sunday all day. I need more Sundays like that...
Collapse