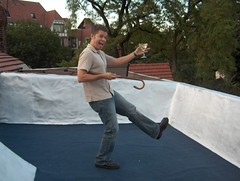 Mr. Entertainment
Forest Hills, Queens, August 11, 2006 - Well, if I'm going to be injured, I may as well make the best of it. The cane is useful for support, for garnering sympathy, for my dance routine (when I get better), and, if I also had a lawn, for shaking at the neighborhood kids when they're on said lawn. Instead of a lawn, we have some nice roof space, which we finally refinished after only five years of living here. The original idea was to then put up a pretty wooden deck, but it was much much cheaper (and faster) to buy some outdoor carpet and lay it down myself. Which I did on a nice nearly-100-degree day (Sunday, July 30), after I had hurt my foot, but before I fully realized it was broken. Not the most ideal of conditions, I must say.

Last night (August 11), we finally got some beach chairs and actually used the roof: we had some useful martinis, dragged the air mattress out, and slept outside. It was a most perfect night - cool, dry, and surprisingly peaceful. One could forget that one is in the middle of New York City. Even being on an air mattress, I slept great. I could even ignore the sun rising over the building next door around 7:30. For a little while, anyway. The sun is very insistent. Too bad it's not warm enough to sleep outside in December when the sun rises at a much more sane hour on weekends...
Collapse