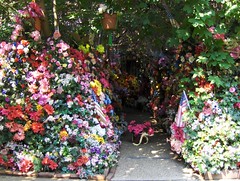 Yes, There's A House Back There

Forest Hills Gardens, Queens, September 9, 2006 - We live in what's perhaps the prettiest neighborhood in the whole city - a square mile or so of mostly Tudor and English Garden-style apartments, townhouses, and mansions, nestled amongst towering trees, all just a 15-minute train ride from Midtown. The neighborhood association has strict architectural guidelines that can be onerous at times (wooden windows, copper gutters, and clay roof tiles are rather expensive to repair and replace), but they do a good job of keeping the neighborhood attractive. The one-year-old mansions fit in so perfectly with the beautiful ninety-year-old mansions that it's hard to tell they're brand new. Considering the crap that is going up in other parts of Forest Hills and the rest of Queens, the guidelines are an added burden I can bear without too much complaining.

The association can tell you what you may and may not do in terms of the exterior of your house, but they don't dictate what you can do in the interior. And oddly, they don't have any specific rules about landscaping. You're free to plant whatever you'd like. Most residents do a decent job with it, and all the yards tend to flow together harmoniously.

One resident, however, most obviously wants to stand out. You can see that in the picture (as always, click the picture for a larger look). The first time we walked by the house (walking through the neighborhood is always such a delight), we were amazed at its profusion of flowers. It wasn't until we stopped for a closer look that we realized that all the flowers were fake! Extremely good-quality fakes, too. The owners probably spend more money and time maintaining their artificial flower hedge than most of our neighbors do with their real plants. Odd as I think it is, it's so well-done that it's barely even tacky. I say more power to them.

One of their neighbors doesn't much like the flowers, though. And this being America, of course he's suing. The ironic part is that this guy's yard is in mediocre shape at best, with its sparse hedge and patches of dead grass. The NY Times wrote about it a few months ago; I don't know what's become of the lawsuit since, but I sure hope he's in the process of losing.