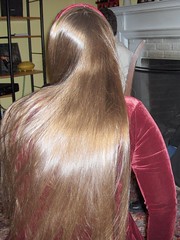 Gimme A Head With Hair

sbtorpey! Good luck dealing with your one-third-life crisis. Remember, 33 is the new 31.

We had a fun picnic with her and

oddthink and a bunch of their friends yesterday in Central Park, with picnic basket and red gingham tablecloth and everything. Even ants. Which for some reason attacked her backpack, where there was no food, and left the actual food alone. Either they were dumb ants or they were trying to cause a diversion.

Today is also my friend John's birthday. We were out with him and some other friends on Saturday night at a Russian bathhouse downtown, which is not as seedy as it sounds. No, it turned out to be a great idea - get a group of friends together, and stay as long as you'd like in the pool or hot tub or sauna or steam room. Plus there's a juice bar and Russian food. And spa treatments if you so desire. And, happily, a good number of hot Russian chicks. I had expected nothing but old men beating each other with birch branches, but I guess late Saturday night the younger crowd comes out. There were still birch branches, though. The birch-branch therapy in the sauna was a pretty impressive display; I felt like applauding after watching it. With five or six other people, it'd make for a decent off-Broadway performance art thing in the mold of Tap Dogs or Stomp.

After we were done soaking and steaming, we ambled over to the South Street Seaport, which I didn't realize was so hopping on Saturday nights. Right on the East River there was an outdoor bar, a DJ spinning tunes, and tons of people drinking and dancing and enjoying the beautiful weather and views. I was fascinated - I had no idea something like this existed, assuming as most New Yorkers do that the Seaport is a dead tourist zone.

Well, adjacent to that bar, there's a nifty performance space called the Spiegeltent, where we saw a band called Man Man. I'd never heard of them before - they play some sort of punk gypsy-ish stuff. I didn't hate it. The DJ was still on after the concert was over a little after 2am, so we stayed out for a while watching the moon rise over the Brooklyn and Manhattan Bridges.

Today is also my friend Edna's birthday. She's in Paris, so we didn't spend any time with her, although we would have loved to!

So happy birthday to you all! (Did I miss anyone? Besides Lance Armstrong?)

UPDATE: Of course I did. Sorry about that, Scott!! I hope you had a wonderful day and got to ogle some hot Russian chicks. Now I can't possibly know anyone else who was born on September 18, can I?