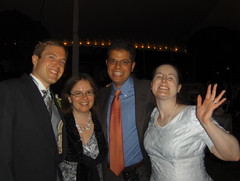 oddthink's wedding was as nice as all weddings should be. The Catholic ceremony was followed by a reception under a giant tent in the yard of the bride's parents' lovely lovely home. Plus lots of friends whom we hadn't seen in a long time, other than having seen most of them the previous week at Reunions. Hanging out with them under tents in New Jersey just feels comfortable, so it's good that the reception wasn't inside some building.

(Photos from the wedding can be found here.)

We thought we'd be running out of weddings by now (isn't everyone married yet?) but a wedding we're going to in August will be the fourth wedding we'll have been to in less than a year. (Though that's still down from our peak of about 8 or 9 one year at the turn of the century.) I don't mind. Weddings are almost always fun, and even when they're not, at least it's fun to have been invited.

Fun fact: We've been to at least 50 weddings, and Sue has never been a bridesmaid. Always a bride, never a bridesmaid, as they say.
Collapse