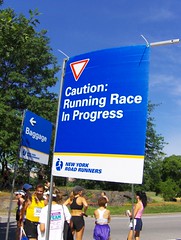 Manhattan, August 5, 2007 - My official time was 1 hour, 40 minutes, and 3 seconds, but according to my watch, I had really run it just over a minute faster. Still, I was more than happy with my time. I had never run a half-marathon before, and training for one was more difficult than I wanted it to be. At first, I was fairly diligent about running or lifting weights nearly every day. But then my knees started to hurt, so I cut back lots. Over the past six weeks, I was running two, maybe three, times a week, usually no more than 4 miles at a time. I only ended up doing four "long" runs (7 miles or more) ever, when I was supposed to be doing at least one a week. And those runs left me exhausted, hurting, and disappointed with my time. So I was dreading the full 13.1 miles. Never mind getting up at 4am to do it.

But somehow I felt great during the race. It helped that the it was in the mid-70s, sunny, but not too humid - far better weather than we had in the weeks leading up to it. And running along in a crowd is actually much easier than running alone (maybe because of some inner competitiveness, maybe because people ahead of you help cut the wind resistance, maybe because there are more than a few attractive people to chase...) The first seven miles through Central Park fairly flew by - and those were the hilly miles.

After the park, the rest of the course ran down Seventh Avenue, through Times Square, west on 42nd Street, then south on the West Side Highway to the Battery. The bands and DJs (and one Brazilian dance troupe) over the last six miles helped sustain me. The crowds were pretty thin (who wants to be up at 7am on Sunday to watch people run?), but they helped, too.

It was about mile 9 when I realized that, having not stopped once yet (I'd grab water to sip or pour over my head every mile or so, but I tried not to slow down), I figured I might actually finish the race without stopping at all. I was a bit nervous, since I had never run more than 9 miles before (and then I had to stop quite a bit), yet here I was making good time, feeling good, and turning south for the final four miles.

By mile 12 I was passing loads of tired people. Maybe it was the energy gels they were handing out at mile 9 that gave me the boost I needed. Whatever the reason, my last mile was actually my fastest mile of the day (7:10), so I finished in a really good mood, and not nearly as dead as I had feared. I later discovered that I ran every 5k portion of the race faster than the previous 5k portion, which I was totally not expecting to do. And I wasn't expecting to feel good the rest of the day - no knee problems, no tendon problems, no nothing. Sure, on Monday and Tuesday my thigh muscles were sore (my right one much more than my left one, oddly enough), but I can totally live with that.

So now I'm taking a well-deserved week or two off from running (if I could only take the time off from work, too.)

(Sorry to say, I have no photos of the race. They'd only let you bring a small clear plastic bag for all your stuff, and I didn't want to leave my camera in there...)
Collapse