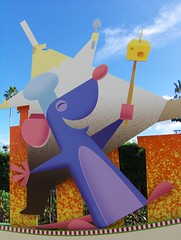 I loved this movie!

Epcot, October 7, 2007 - While in Orlando, in addition to running, I also spent a day at Epcot with Sue and her parents. It's Epcot's 25th anniversary; I was there the year it opened, and it's interesting to see how it's changed. All the buildings are all pretty much still there, but everything seems much more colorful. I recall the design of Epcot to be all "futuristic" concrete and gray back in 1982, but apparently that version of the future is as dated as the original Tomorrowland, or, of course, as dated as today's version will be 25 years from now.

The Epcot International Food & Wine Festival was going on while we were there: scattered throughout the World Showcase were about 30 kiosks from various countries (and Oklahoma) selling bite-sized bits of food, along with all types of beer and wine (they make wine in Turkey? Who knew?) Strolling from kiosk to kiosk was a surprisingly delicious (and not-unreasonably-priced) way to have lunch. We need to go back next year, when Sue can sample the beer and wine with the rest of us...

(Photos of our trip, which includes Celebration and other parts of Disney in addition to Epcot and race photos, can be found here.)
Collapse