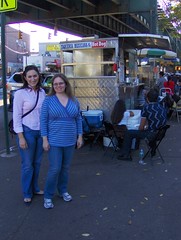 Corona, Queens, October 21, 2007 - This past Sunday was one of those perfect warm blue-sky autumn days that are just perfect for eating a whole mess of tacos. I got the idea to do a "Taco Tour" from an article in the Village Voice (which is only worth reading for the restaurant reviews and escort service ads), and boy, it didn't steer me wrong. It's probably one of the city's better-kept secrets (well, it's a secret to those who aren't Latin American immigrants), but the blocks under the 7-train through Corona and Jackson Heights are chock full of restaurants and street carts selling tacos. All sorts of tacos: beef, pork, and chicken for sure, but also lamb, egg, chili pepper, pumpkin, tongue, tripe, ear (yes, ear)... all cooked fresh and so very delicious. And for $2 or $2.50 each, a fantastic bargain.

Over the course of about three hours and two miles, we hit five taquerias and a bar; I had six tacos (not including ear, but I did try tongue, which was surprisingly good), a beer, and a churro. Plus we bought some quiche pans at Pattycakes (Sue found an amazing recipe for quiche in Cook's Illustrated). If I were *really* hungry, there were at least another thirty or forty more carts and restaurants to try, but those will have to wait for another gorgeous day.

I have photos here, but seeing photos just doesn't do it justice. You have to eat for yourself - take the 7-train to 103rd Street or 111th Street, and walk west along Roosevelt Avenue under the tracks until you're full. Yum.
Collapse