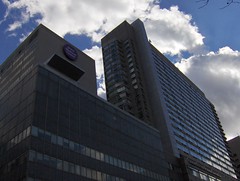 Where The Magic Happens

Manhattan, February 9-10, 2008 - As I suspected from the beginning, as all my friends who went through them told me, I now know through direct experience that childbirth classes are a waste of time and money. An entire weekend was lost listening to a cheery nurse go on and on about stuff every single couple in the room had most likely already read in What To Expect When You're Expecting. The nurse was nice enough - a sweet middle-aged woman - but she taught the class as if we were first-graders. We knew we were in trouble when she earnestly asked us early in the class "does anyone know why labor hurts?" I wanted to answer "It's God's punishment for Eve's sins" (Genesis 3:16), but I couldn't really read the room well enough to know how that'd go over. So I kept my mouth shut and glared at Sue.

And as many a friend told us, anything we might have learned (breathing, relaxation techniques, when to call the doctor) just goes right out the window when you're in the thick of things. Either the situation on the ground changes, or you're going to second-guess yourself and go to the books anyway.

My perspective is that I'm going to be there, but I'll trust the experts to do their jobs, and I'll do my best to stay out of their way. All I really need to know is how to get to the hospital. And I know that. I'm hoping it's not March 17 (the actual due date) because driving into Manhattan on St. Patrick's Day sounds less than fun. (Sue's already told me that the subway is straight out...)
Collapse