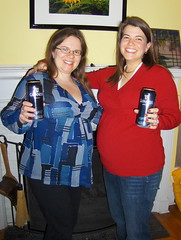 Sarah gets to open her Guinness first.

Manhattan, March 5, 2008 - That's right, Lily Reed Tobey, 4lbs 11oz. Mom and baby are doing well, and... what's that? Oh, thank you, but don't congratulate us - congratulate our neighbors! They had their baby a month early; we think they induced because they really wanted to snag the name "Lily" before we changed our mind. We all thought Sue and I had dibs on a name, since we were due three weeks earlier than they were. And they knew "Lily" was one of our final four, but we ended up choosing another non-Lily name, so we "gave" them Lily with our blessing. Still, we suspect they wanted to be sure.

As for Sue, she's still very much pregnant and is not too pleased that it's very possible that she'll have a baby that's twice as big (that'd be 9lbs 6oz). Apparently, the baby is quite large already, but facing the wrong way, so we're going to just wait and hope she turns around. In the meantime, she'll get bigger. (The baby, that is. Sue's only gained 23 pounds so far - much less than we had originally feared. Friends love telling us how they gained 50, 60, 70 pounds. Yet she's still complaining. I mean, really...)
Collapse