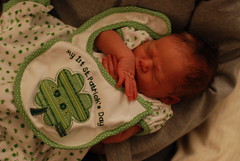 Today (St. Patrick's Day) is Violet's due date, but instead she's nine days old. So far we've done well, but that's because right now it's not too difficult - all she does is sleep, eat, cry, and poop (sometimes all at the same time) and we have those four events covered. But somehow it takes all day to cover it all. We can probably stand to get a bit more efficient.

Anyway, I promised details: There we were, a week ago Friday, about twenty minutes into Bender's Big Score

, when Sue felt a sharp, painful kick. Which was odd, because up until then, none of the baby's kicks had hurt. A few minutes later, having gone up to the bathroom, she shouts down to me: "How can I tell if my water broke?" Darned if I knew, but she soon decides that that's what happened and calls the obstetrician, who tells her to get to the hospital as soon as she could.

Sue was surprised; after all, she hadn't felt anything other than the kick. No contractions yet. But the doctor, presumably remembering that she had been dilated 4cm all week, insisted. So I started packing last-minute items while she showered (knowing it'd be the last shower she'd get for days), and that's when her contractions started. Three minutes apart, just like that. At exactly 11pm, less than 20 minutes after her water broke, we were pulling out of our driveway and hoping for good traffic into Manhattan.

And traffic was indeed good, thank goodness. 23 minutes later, we're at NYU Medical Center. I drop her off on the 8th floor, and go back down to park the car (the valet isn't there at night) and then to get her properly Admitted. The guy at the Admitting desk wasn't in much of a rush (we were to discover over the next few days that nobody at the hospital ever seemed to be in much of a rush) and I wasn't back to her room until nearly midnight. I see her surrounded by a dozen nurses and interns and med students and doctors and find out that she was 7cm dilated when she was first looked at.

Our obstetrician suggests she just start pushing, as the baby could come pretty soon, but Sue demands the epidural. Which she gets, although not as quickly as she would have liked. By 12:45, the drugs have kicked in, and most everyone leaves. A nurse or intern or someone would occasionally wander in to check in with us and the monitors, but for the next two hours, it's mostly just us doing nothing. Sue tells me that before the epidural the contractions were very similar to a leg cramp - slightly less painful, even - only they keep coming, and there's nothing you can try to stretch to make it go away. But at least there's an epidural.

At quarter to three, the obstetrician seemingly randomly decides it's time to start pushing. He had been in another room delivering another baby, so had that baby come sooner, we suspect she would have started pushing sooner. The nurses holding her legs were very supportive (in both an emotional and physical way), but it took us a while to catch on. When they were both shouting things like "Great job! That's an excellent push! Come on, you're almost there!!", I initially took them at their word. Half an hour later, I began to realize that while they may have meant what they said, it did *not* mean that the baby was about to come out. So I kind of got a bit jaded, and even after the doctor came in, put a sheet over her knees, and got all the instruments out, I figured that it'd still be another hour or two or three of pushing. Yet a minute or two later, after being resigned to the fact that I'm never going to see this baby, boom, there it is. Totally took me by surprise.

After they poke and prod the baby for what seems like an eternity, we're left mostly alone until about 6am, when she's moved to her room, and I'm told to go home. Fathers can't stay in non-private rooms, and visiting hours don't start until 8:30. The bastards. But I was secretly glad to be able to get home and sleep. Only I didn't sleep much. So I uploaded pictures, and then the rest of my life started...
Collapse