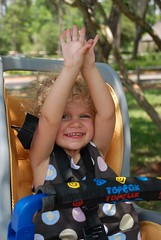 She also had her first bike
ride a few weeks ago...
Violet slept a whole night without her pacifier last night for the first time since she was a couple weeks old.

And while that is a momentous milestone in her life, I'm aware that objectively it's not exactly special. All kids give up their pacifiers some day. Recording that fact is more for me, though. And maybe her some day. You just get to come along for the ride.

Violet loves singing the ABC song; she'll sing it over and over again, and I surprisingly don't get tired of hearing it. Ask me when she started singing it, though, and I actually don't really remember. It's been a few months now - even more depending on how generous you want to be with your definition of "singing the whole song". I know she could definitely identify all her letters before turning 2. But was it at 22 months? 20 months? Again, I can't remember. And this is not to brag; I want to be accurate about this is so I don't exaggerate her accomplishments in the years to come ("My Violet is so intelligent, she could spell her name when she was eight months old!")

Never mind all the minor milestones I've already forgotten about. Hence, writing down the accomplishment of giving up her pacifier. As an accurate record, and maybe as a way to kick me into writing here again. It's harder than Flickr and Facebook and Twitter, but I'm going to try.

So about that pacifier: I actually didn't really want to have her give it up. I kind of feel mean in doing so. I love that such a small thing gives her such great pleasure. We had already taught her that she only gets it in bed and in the car - she grasped that before she was 2 (don't ask me exactly when). It's cute how she'll hide the pacifier under her pillow when I tell her that she's awake now, she has to put it down. And it's wonderful how she lights up when she finds her pacifier under her pillow when I put her to bed. I'm even impressed that she knows not to "cheat" and use it when she's playing in her room and aware of where it is.

Probably subconsciously, I like her having it because it means she's still a baby. But the cuteness is overt enough that I don't need that reason.

A few nights ago she was so tired that she was falling asleep during dinner, and so we put her right to bed, no pacifier. We gave it to her when she got up a few hours later, but a seed had been planted: maybe it's time? I'd noticed her bottom front teeth seem to be angling inward a bit; that strengthened our resolve. Don't know if it's the pacifier's fault, but better to not find out.

We prepped her when she was tired the next night - "you don't need your paci, you're a big girl" and "you're going to need to give these to your little brother when he's here" and even "it's no good for your teeth, you want to have strong teeth, right?". She seemed to get it, but when it was time for sleep, no dice. Screaming and crying until I gave her the choice: paci or mommy and daddy's bed? She picked our bed right away and fell asleep happy. We put her in her bed in the middle of the night, she woke up early (for her - like 7:30ish), came into her room, and demanded the pacifier *and* our bed. We were too tired to argue, so she got both and she slept soundly for another two hours.

The following night, there was no screaming and crying, just a plaintive quiet (and heartbreaking) "Paci? Paci? Paci?" for a while. Then a refusal to go to sleep. Not in a bratty way; she'd just get up and play and every ten minutes or so open her door and try to sneak out and come into our room. This lasted for almost two hours until finally around midnight she gave up and slept. Next morning she was in our room again early, and we gave her the pacifier and our bed. Hey, it was a start.

Then last night, we were able to get her to bed at a reasonably normal time for her (10:30) with no pacifier and a minimum of fuss. She still asked for it, but accepted "no" rather quickly. And then she slept through until 8:45, came into the room, wanted up in the bed, but didn't ask for the paci, and didn't even try to grab the ones in plain sight on our nightstands. She didn't go back to sleep, either, but that's okay, I was already up.

We're still giving her the paci when she naps (on the days when she still naps), but taking it away as soon as she goes to sleep. And we'll probably give her one in the car if she asks for it - we have a six-hour trip to Maine coming up in a few weeks, and our motto is "anything to keep her quiet and happy". Hopefully she'll be good enough by then to know that a pacifier is only for the car. And then she'll probably be smart enough to demand more car trips.

UPDATE - Surprisingly, she didn't need the pacifier at all on our car trip (which ended up being about 7 hours up and 8 hours back). She only asked for it once, early in the trip, very quietly, and immediately took "no" for an answer. Habit broken!
Collapse