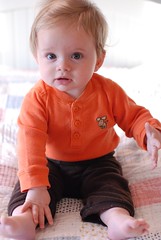 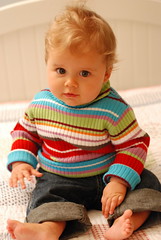 It's funny how the eight months after your kid is born seem to go much more quickly than the eight months before your kid is born. It feels like Sue was pregnant forever, and it seems like Everett was born yesterday. It's more pronounced with a second child, because you're not paying full attention to everything they do like you did with the first child. So they younger one grows up almost unnoticed while you're busy with teaching the first child to read and get dressed and use the toilet.

With Violet, I made sure to make friends with other parents with kids her age. She had a whole gaggle of friends by eight months. Whereas Everett pretty much makes do with Violet's friends' younger siblings, when they're around. So far he hasn't complained. He's happy to just be around Violet, and Violet in return loves him to death. And fortunately, I don't really mean that literally anymore. She's gotten much better at playing with him without injuring or endangering him - no more trying to feed him grapes, or lying down across his face and calling it a hug, or seeing how funny he looks with a plastic bag over his head. I was beginning to wonder how any younger sibling survives.

I think Everett's survival strategy is to just get bigger than Violet. He was as heavy at six months as Violet was at nine months. (Though you can't really tell from these photos - Violet looks way chubbier, but she did weigh less. Everett is just solid.) Given how skinny she is now, I almost expect him to outweigh her by his first birthday!