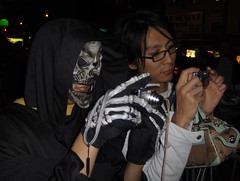 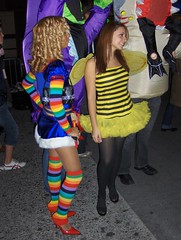 The Most Popular Costumes 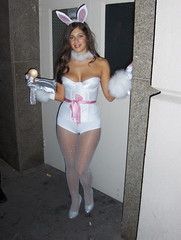 My Most Popular Halloween Photo 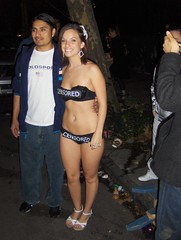 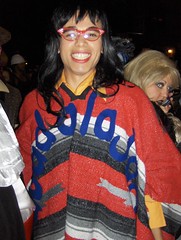 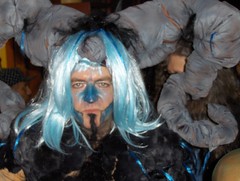 There Are Those Who Call Him... Tim

susanofacadia) got invited to her assistant's boyfriend's party. It's difficult enough to come up with a costume; it's even harder with only two days' notice. We just threw on about half of our leopard costumes from last year and called it good. It was good. The party was fine, and people were nice enough. I didn't know a soul, and Sue only knew her assistant. It made me realize that on the Saturday before Halloween, as long as you have some semblance of a costume, you can buzz into pretty much any apartment building in Manhattan and be let into a party. If we were in the mood for party-hopping, maybe we would have tried. Perhaps next year.

That was Saturday evening. Sunday we went furniture shopping. Furniture is expensive. And not even interesting enough for a blog. So on to Monday...

Monday, thanks to Sue getting free tickets from work, we went with

lady_i, and Doug (Doug, you really need a LiveJournal ID) to see "Evil Dead, The Musical". I have never seen such an enthusiastic audience for a play ever. Sue and I have never seen Evil Dead (The Movie) - in fact, we've barely even heard of it - so we were completely shocked at how much of a cult phenomenon it seems to be. We thought the play was good enough; although for me, the whole campy-ironic-wink-wink-intentionally-amateurish musical genre is getting old. But hey, it's certainly worth free.

And after my French class on Halloween, I wandered over to 6th Avenue for the Greenwich Village Halloween Parade, which is always great fun. It's always too crowded to see much of the parade, but even blocks away it's fun enough to gawk at all the costumed spectators. (It was a really warm night - it had gotten into the mid-70s during the day - so it was a great year for costumes). The most popular costumes, as far as I noticed, were Rainbow Brite and Sexy Bee. Last year there were a lot of Marios (of Nintendo fame), but I only found one this time. Me, I was by myself with no costume, but I took lots and lots of pictures, so you can pretend you where there with me.

And now it's November. It's cold, and nobody is wearing costumes in the subway anymore. What a shame.
Tags: halloween
Subscribe